Yo, this is Jay Dubb – Founder and HNIC of Badboynerd.com (That’s ‘Head Nerd In Charge’ – what were You thinking??) Read more about me and comic books below!

_______________________
As you can see I am very passionate about comic books! in my opinion, the comic book format is the Great American Art-form, representing some of the most brilliant creative minds in literary history! Some of the best fictional stories ever written happen to be comic books – and, as Hollywood Execs have realized over the past two decades, a cash cow for movie studios cranking out mega-blockbuster movies!

As a collector, My particular passion is for 1st Appearance and First Print comics.

Comic books introducing a particular character for the first time. Usually, a 1st appearance issue is more valuable than other issues due to a character growing more popular over the years. Collectors like to own the issue that started their history!

Two examples: the 1st appearance of Wolverine is Incredible Hulk #181

.and the first appearance of Deadpool, New Mutants #98. 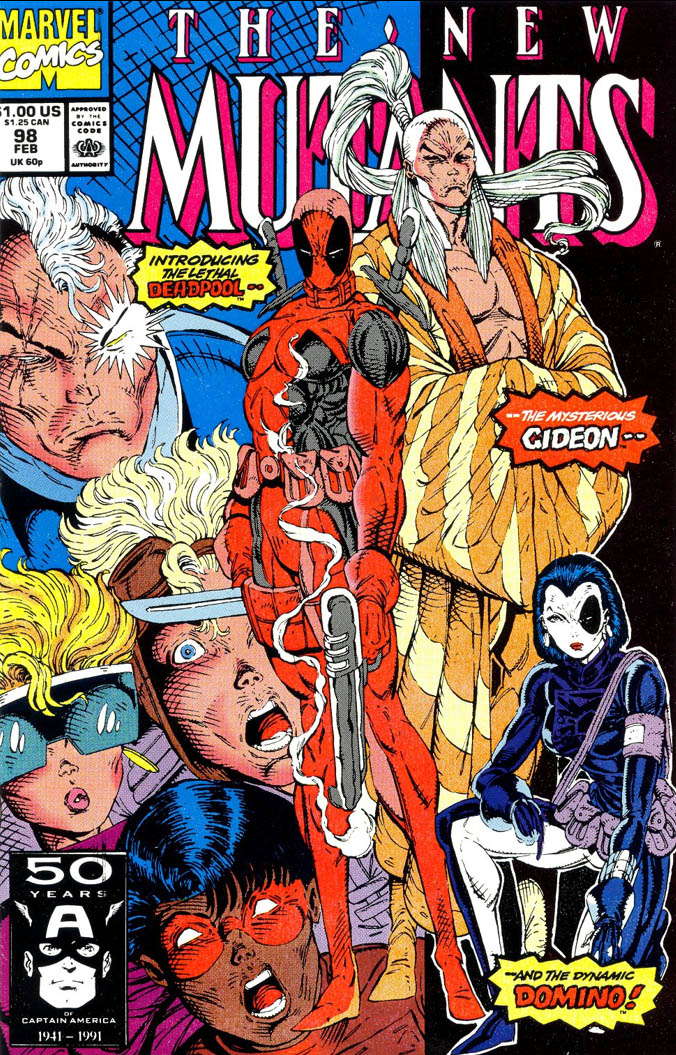 Now, we ALL know that Wolverine is hands down one of the DOPEST characters of all time! And Deadpool -aka- the ‘Merc with the Mouth’! has gained ridiculous popularity (his movies as funny af!)

In both cases, the books retailed at regular price (25¢ for Hulk, $1.00 for New Mutants!) – but as the characters became more popular those issues drastically increased in value! Imagine being a kid and buying Hulk 181 for 25 Frickin cents! :O – imagine buying multiple copies!!

First Prints are the initial printing of a certain book issue. A printing designation is usually found on the inside cover in the publication fine print section. This print usually determines the audience/market demand of that title.

A first print can have an initial run anywhere between 500 to 100,000 copies. If those sell out quickly, the publisher will go pack to the press and print out MORE copies, or Printings (2nd print, 3rd print, etc.). Low first print runs are extremely valuable to collectors based on their availability and rarity. Case in point: Mouse Guard (2003) is a special format/self published book with an initial

First Printing of only 250 copies! Devoted collectors drove the price up from a $3.00 retail to a staggering $1,350! (yes that is one thousand dollars) – for a book about mice!! (I’m sayin’ tho…they ARE cute, but still!) Although most books now come in trades and digital format– in my opinion, certain first prints are still the most desirable to own.  Only so many are printed, and only so many are available. 🙂

In some cases, a publisher will purposely print more copies with variation covers (Variants) as a way to satisfy the market, entice more readers, and make the book more collectible.

Imagine the amount of talent and hard work that goes into creating one comic book issue! Now imagine how much effort is put into an ongoing series! A self-owned book like Spawn – creator Todd McFarlane has been involved since its inception back in 1992 (26 years and running!) Now picture how those issues can last indefinitely – based on the proper care and maintenance of the book. And finally….imagine dozens, even hundreds –thousands of people wanting those available copies. A finite product for a neverending audience!

Collecting comic books is like collecting fine art – It is a rewarding treasure hunt that can be very profitable!
The staying power of comic books is undeniable. They are one of the purest and long-lasting forms of art and entertainment – literary or otherwise.

– The Granddaddy of them all! Introduced the world to SUPERMAN 8 decades ago and still going strong…!

– 80 years ago,Issue #27 featured a story about some guy named ‘Batman’. The rest is history!

– That ‘Batman’ dude eventually got his own title alongside the above. Introduced us to some of the greatest villains ever like The Joker, The Penguin, Catwoman, Two-Face, The Riddler, and Bane!

– Without doubt THE biggest name in the comic book world! Single-handedly took Marvel to the top by creating HUNDREDS of iconic characters such as Spider-Man, The X-Men, Fantastic Four, The Avengers, and The incredible Hulk! Sadly, the world lost the greatest storyteller in modern literary history. May he live forever in our hearts in minds – Excelsior!

– The most popular title of the Silver Age comic book revolution. Stan Lee created the story of a nerdy teenager who gets bit by a radioactive spider and gains incredible powers! But along with those powers comes incredible responsibility! ‘ASM’ has relaunched a few times, but current issues are as ‘amazing’ as they ever been!

– Stan Lee does it again! Introduces the world to the concept of MUTANT SUPER-HEROES. Marvel Comics’ most popular title during the 1990s!

– In 1993 DC launched this imprint to showcase mature and adult-themed comic books. Heavy on the drama, fantasy, horror, dark humor, and hardcore situations. Racks up yearly at the Eisner Awards – the Oscars of the comic book world! I call Vertigo the ‘HBO of comic books’.