Ayo its your boy Jay Dubb that badboy nerd MFer with a late AF pull list!

THE FOLLOWING IS some of the hot shit i read right before the quarantine shutdown kicked in and CANCELED the entire comic book industry! 😦

Sooo it seems that Catwoman (aka, Mrs Bruce Wayne) made a SERIOUS boo-boo way backinthaday.

She hooked up along with Riddler, Penguin, and The Joker, and made a pact with this devilish dude named THE DESIGNER. Apparently, Designer’s super power is the ability to plan shit WAAAAY in advance lol! (we are talking DECADES). Whatever plans were put into place all those years ago are NOW coming out!

Designer was supposed to be dead!  But with all the crazy shit that’s been going on recently..who TF knows?? #Ooops!

MEANWHILE… is there some underlying sexual tension between Batman and Harley Quinn?! Or, maybe its just me??

Batman goes for the over-the-top entrance (of course) but Deathstroke is like, ‘”Bitch Fck yo, batplane!”  Kinda like Rick James did to Eddie Murphy’s couch lmao

The ensuing fight is CLASSIC.

Catwoman and Harley get all spicy with each other. Harley calls her a LIBRARIAN – HA! And I can totally see that! (it IS the whip)

So the BIG question is – how much of all of this is BY DESIGN??? (pun intended) Even Bruce doesn’t know! The Designer may have planned ALL OF THIS years ago! Bruce has his hands full….  and the Joker is lurking off-panel in the background, plotting and planning HIS big SCHEME…

On ONE hand you have Apex Lex Luthor – the smartest man in the world who made a deal with a sinister being and traded his humanity  for Godlike powers.

On the OTHER hand you have The Batman Who Laughs – a twisted Dark version with all of Prep-Time Bruce Wayne abilities and Joker’s madness.

An evil genius vs an evil genius! This cannot end well! Lex does everything in his power to defeat this abomination from the Dark Multiverse, but does he succeed? Laughing Bats is my FAVORITE new character of the past 20 years and he is proving time and time again to be a Top Ten Villain! Something really BIG is going to come from this issue as a major turning point.

Real talk, I’m not even a FAN of DC Comics but recently their shit been FIRRRRE 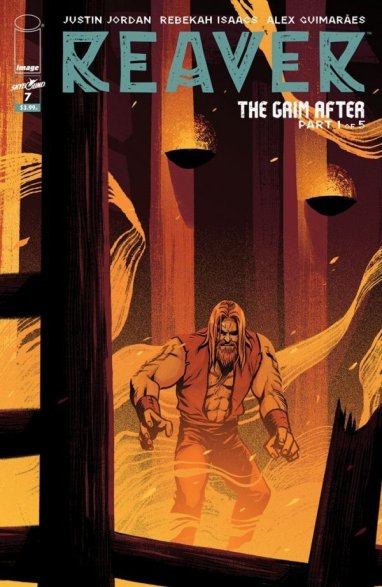 YES! The return of REAVER!

If you read comics books and love fantasy/dark humor shit you should DEFINITELY fock with Reaver!

I talk about it here, and here.

Picking up after that shocking ending from #6 finds the goliath known as Essen Breaker (Ess) trying to start a new life – a life free of violence (yeah right, good luck with that!). In this issue we meet old acquaintances and learn a bit about his past. Of course, Ess quickly gets embroiled in some really bad SHIT!

REAVER was one of my top picks of 2019. I love the new artwork from Niko Henrichon. His artwork is RIDICULOUS! Fills the page with beautiful Old Worlde details, PERFECT for this book!

Action – Adventure – violence – dark humor – anti-heroes and scoundrels… this book has it all! Fans of fantasy + swords and sorcery will love REAVER!

FOCK THAT – this is my Guilty Pleasure!

Dont be fooled by the colorful ‘Hello Kitty’ Cuteness…AGGRETSUKO is some hard-hitting, adult satire! Hands down the funniest, most clever-written, new series of the past year!

Aggretsuko (‘Aggressive Retsuko’) is a Netflix original about a red panda name Retsuko, a young urbanite accountant who slaves away at a Japanese trading firm. Normally quiet and passive, she suppresses her frustrations until she goes full FULL. DEATH. METAL. KARAOKE RAGE!!!

TRUST ME It is the funny shit you’ve ever seen in your life! 😀

I got into this anime with my 10-yr old son and we are both HUGE FANS.

The book is equally as funny as the series! Page 2 made me legit LOL at Fenneko’s comment (followed by sipping-tea emoji) LMAOOOOO

The teenage bastard child of DORMAMMU – one of the evil-est demon villains of all time – joins a school for magic! ‘Doyle Dormammu’ (yes, his name is Doyle) joins Emelie Bright, Moonpeddle, and Eric and Alvi of Asgard + a diverse, colorful cast of young mages (including a Frost Giant) in Doctor Strange’s wonderfully bizarre Magic Academy!

Lot’s of guest appearances from Marvel’s magic heroes including the Ancient One, Damien Hellstrom (the Son of Satan!), Illyana Rasputin (Magik!), and everyone’s favorite ‘witch’ the Scarlet Witch. And of course Stephen Strange himself. But my favorite has to be Brother Voodoo as lead teacher.

No wait, my favorite moment is that a Mindless One (‘Mindful One’) is the school cook! Or is it Moonpeddle, the half-human/half-fairy from Brooklyn? Or is it Despair (‘Dessy’)? – the dark demon child from Limbo? This book is going to be a lot of fun 😉

Ayo, That’s a wrap for now! Seriously waiting for the quarantine shutdown to lift! Diamond Distribution brought the entire industry to a grinding halt! We need our comic book fix!!!

Most of these books and otherse can be found on my website store here!