Jay Dubb here for another Bad Boy Nerd movie review! This week I checked out the Fast and Furious spin-off ‘Hobbes and Shaw’, starring Dwayne Johnson and Jason Statham! How does this movie compare to the rest of the FF series? Read my review below!

Dwayne (Agent Luke Hobbes) and Jason (Deckard Shaw) trade physical punches, verbal jabs, and facial sneers for 2 hours. Lots of action. Lots of guns. Lots of muscles. Lots of one-liners. Fun at first, but then gets tedious. This  is action junk food at its finest. Halfway through it I was thinking how much I miss Fast and Furious movies – which is saying a lot.

The appeal of Fast and Furious was largely that Unstoppable Anti-Hero Goon #1 (Vin Diesel as Terreto) and his epic anti-heroism is offset by his mortal friends, which balances out the ridiculousness.

Furious 5 added Goon #2 (Johnson as Hobbs) as the Anti to his anti-hero.

Furious 7 added Goon #3 (Statham as Shaw) as the ANTI to both of their Anti-heroes.

Its a LOT of macho posturing, but Still you had other cast members to sorta balance it out.

But now you slap Goons #2 and #3 together in their own movie and its a mess.

In this Fast and Furious spin-off (which did not get Tyrese Gibson’s blessing 😅) Agent Hobbs and British guy Shaw team up against their will (of course!) to stop a deadly…you know what, the plot doesn’t matter. We will get to that later on 😛 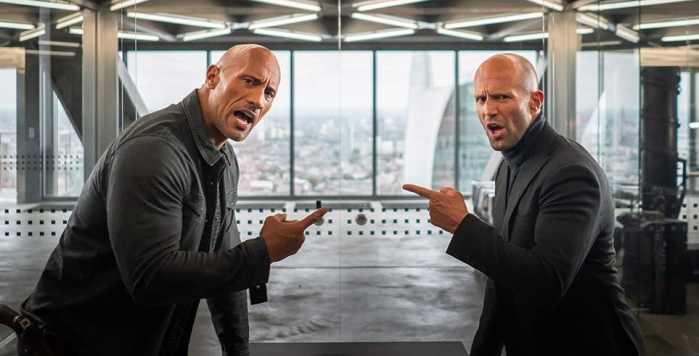 “It’s HIS fault this movie sucks!”

Hobbs and Shaw (H&S)  plays out like a classic G.I. Joe cartoon. No matter how many Cobra troopers are shooting at the Joes (it could be hundreds) NOBODY EVER GOT HIT. Seeing as GI Joe is a cartoon it made sense.

Unfortunately, H&S is NOT a cartoon, so a lot of this movie did NOT make sense.

In Hobbs and Shaw – it doesn’t matter what happens to our two Goons, they simply stand up, crack their neck sideways, grimace, and walk away – scratch free and zero broken bones.  (Hell, even John Wick got stabbed and took bullets!)

At some point I wondered if there was an MCU tie-in? Were these two a part of the Super Soldier program and we didn’t know it?? They are virtually indestructible. So much so, that the ACTUAL Super Soldier/ Super Human (Idris Elba as Brixton) still couldn’t stop them. 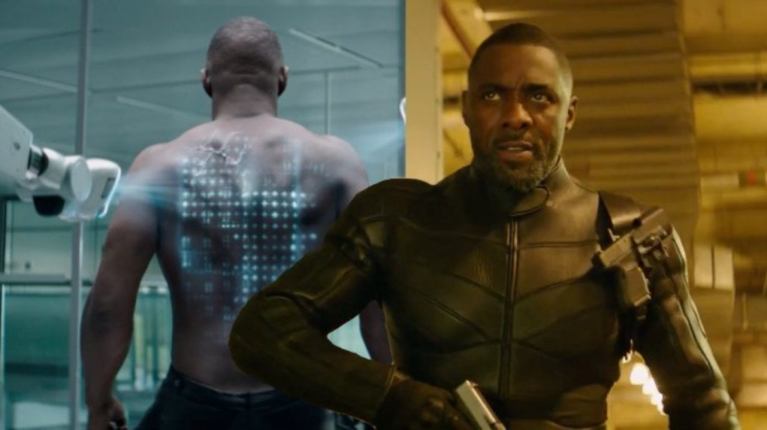 In one scene he is tossing them around like rag dolls. By the end of the movie it becomes a generic fist fight. So i gotta ask – what was the POINT of creating the character Brixton as a Super Soldier Super-Human Killing Machine… but the best way to stop him is to… punch him MORE and… punch him HARDER?? 🤔

Which brings me to what I call Villain Sympathy. Look, Nothing beats a great villain. At some point, the villain needs their shine. Think about how many years a villain spends formulating their Grand Scheme…only to have some dude show up and foil the entire plan in 2 hours (movie time). Movies NEED another Darth Vader, or a Voldemort, another Hannibal Lecter. Someone who survives beyond 2 hours.

Idris Elba’s ‘Brixton’ is an intriguing character and there are a LOT of ideas to explore. But it all came down to ‘Just keep punching him until he doesn’t get back up!’ – What a wasted opportunity.

That was my main issue. H&S doesn’t take itself seriously AT ALL. It starts off goofy and gets cornier by the minute. Matter fact, it adds two completely unnecessary surprise cameos for even MORE comedy relief (the movie itself IS comedy relief). The cameos were funny for a few seconds and drew laughs from the audience (even ME, yes) – but then it got confusing. Almost like two very weird crossovers from three totally different movie universes. You have to see it to know what I mean.

Don’t let anyone spoil it for you.

Look man, I dont even consider myself an (ahem!) “AUTEUR OF FILM” like that  lol – but ghaddamn even i understand good filming.  Director David Leitch – Dude, I understand we have two handsome leads in the movie, but every other shot does NOT have to be a full-screen close up of their face. You don’t have to man crush and remind us every 5 minutes. smh…

Then there is this thing called FRAME RATE. The speed at which something is filmed.

Apparently, Leitch ‘co-directed’ the original John Wick along with credited director Chad Stalhelski. If David was the HAND that directed Wick, then Stalhelski was the GLOVES. That being said, In this movie the gloves were OFF. Here, the fight scenes here look so amateurish to the point they are blurry. (frame rate, folks).

Compared to the brilliant violence that is John Wick, H&S was at times hard to watch.  And I get it, I TOTALLY get it… Digital handhelds are ALL the rage now. But damn bruh, use a camera track sometimes?? Some of the scenes shook so much it looked like ‘Cloverfield’.

Overall, this movie is so by-the-numbers there wasn’t much to take away. There are scenes that destroy common sense (you can lift 4 trucks off the ground… but you can’t life ONE? 🙄 okay) and some made my brain hurt.

I want to say it was Average but it was slightly BELOW average.

Only see this IF and ONLY IF you are a hardcore action fan –OR -if you really need to stare at The Rock and Jason Statham for 2 hours. Or– if you need to see Idris Elba in a cool bodysuit (I fall under the action part, hush). Otherwise, wait for streaming.

Or pirate. Your choice.

Something about a deadly virus getting out to destroy the world and blah blah blah, yawwwwn. never mind.