What’s up, peoples! the amazing, Jay and Friday here, bringing you yet another one of our infamous Top Ten lists. Yes, we know we did a Top Ten list on comic hotties, but we’re here to break it down for the Disney acquired Marvel comics heroines. although you may not agree with our list, remember this: its OUR list! now scroll down past this pic of Mickey Mouse and let’s get to it. 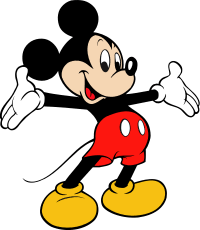 Honestly, what more do i have to say? Model, Pilot. Telekinetic assassin. Do you really need anymore on your resume? Betsy Braddock can do it all. Pyschic knives, telekinetic katanas, the ability to move through shadows, cybernetic eyes, and a skilled martial artist. Oh yeah, did i mention she’s British?!! Bonus feature: check out that outfit. be looking for a Casting Couch near you soon……..

Ahhhh, Silver Sablinova. I almost forgot about you. And really, how, oh HOW could i forget about the CEO of Silver Sable International? but no, you’ve made the list. And what’s even MORE amazing? You don’t even have any powers!!!! No shape-shifting, no teleportation, to rediculous super human strength. No, you’re just a female Batman, minus the creepiness and cave-dwelling. Did i forget to mention hot?! You’re that, too.

3. Sue Storm, aka The Invisible Woman 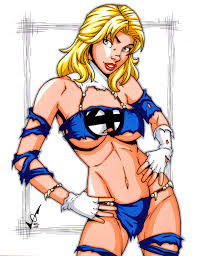 Sue Storm. Yes, we know. they did you wrong by casting Jessica Alba (although she is super hot) to represent you in the live action version of the Fantastic Four. But that’s ok. We here at 2 Comic Book Guys forgave them. You still have the power that most people would pick given a poll of “If you could have any super power, would would it be?”. Because most people are perverts, and would wanna see others when they think they’re not watching. And most comic book fans want to be your husband, Reed Richards. Tsk, tsk.

This mall rat, ex thief, and X-Man loves all things teenage girls are supposed to love, except she has the ability to project plasma energy in the form of what she calls “fireworks”. A member of the X-Men, Generation X, the X-Corps (briefly), and the New Warriors (as Wondra), she jumped on to this list as my number 4 top Marvel hottie.

This sexy cop turned detective sports a bionic arm, wits, and fears nothing and no one. Working alongside Luke Cage and Iron Fist, she is now a bounty hunter and a bail bondsman. Honestly, do you want this big, bad, mama chasing you down? Yeah, me neither.

Soon to be getting her own movie! We here at 2 Comic Book Guys are excited about this one! I might even have to start reading some old back log books to get updated on the charcter. With all of the CBM’s dropping over the next 8 years, the nerd-dom around here knows no limits!

Friday, off to do some more research!

I have a few favorite ladies to add! In my opinion, NO Marvel Hottie list is complete without the following:

Natasha Romanov – not only a top-ranked spy but is the world’s best looking 80-yr old woman, thanks to WWII Russian biotechnology! She has hooked up with Daredevil on several occasions. I would LOVE to be interrogated by her 😀 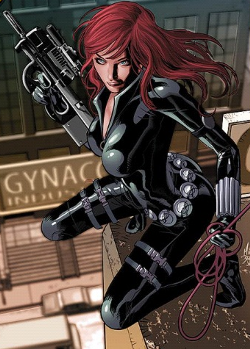 Felicia Hardy, cat burglar extraordinaire! this platinum blonde bombshell single-handedly popularized the latex catsuit, much to the delight of cosplay fanboys around the world! ‘Cat gets bonus points for having a psychotic fetish for Spider-Man! Gotta love the crazies. 😛 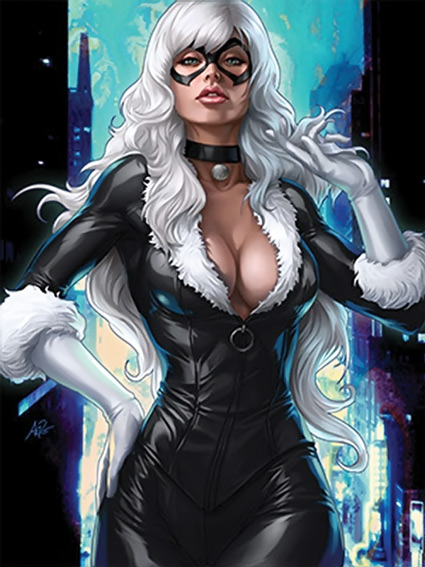 The White Queen’s TRUE mutant power is overt sexuality. She ‘just so happens’ to be an Alpha-level telepathic. And can turn her body into solid diamond! Ever since her first appearance in Uncanny X-Men #129, Emma Frost tantalized fans in ‘barely-there’ clothing. And we thank her for that! 😀