Friday here! With the invention of Netflix,

and the creation of my kids, I’ve been able to watch cartoons without having to explain to my wife of how big of a nerd that I am. No need with kids. I am particular to the cartoons from the comic book drama (I can’t begin to explain how much I want to sell whatever the team who created Yo Gabba Gabba

was taking. I would be incredibly rich!), since they were beginning their popularity when I was a kid. Hey, everyone my age watched Power Rangers,Transformers,  GI Joe, TMNT, Tail Spin, Duck Tales, Rescue Rangers (man, Disney had my tv on lock from like 2 pm until 5 in the summer). And don’t act like you didn’t. As a grown (and I mean GROWN) man, I have gone back through the television time machine that is Netflix and watched entire seasons of the shows I couldn’t wait to get home to after school. Now, who do I have to talk to to get WB to release Tiny Toons, Pinky and the Brain, The Animaniacs, and Freakazoid on Netflix?

I was a big fan of GI Joe and Transformers most of all. They came on in the morning while I prepared for school. And they have various inclinations over the years all on Netflix. From the original Transformers, to Beast Wars, Rescue Bots, Transformers Prime, and the original GI Joe, to GI Joe Sigma Six

(since removed, never got to finish the series), and GI Joe: Renegades, based on the original story, part of the Sigma Six storyline, and the live action movie (changing Ripcords race to African American). But here lately, WB and DC have been tearing up the small screen in the mornings on the weekend and during prime time at night on weekdays. I want to see more of their smaller heroes in live screen adaptations (Nightwing, anyone?), and not just on YouTube. The ultimate fanboy in Jay and myself would love to see these stories that we grew up with come to life by richer fanboys just like us, and then ultimately crossover onto the larger screen backed by bigger budgeted fanboys……….just like us. But for now, the cartoons will do. Netflix has an incredible library for both Marvel and DC fans alike. Multiple shows of Spider-Man, Batman, Justice League, and awesome shows like Young Justice, Ben 10 (every damn adaptation of them), Samurai Jack, Avengers Assemble, Ultimate Spider-Man, 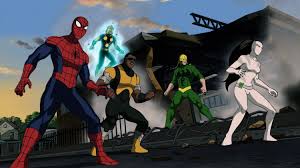 Yes, it exists. Although the Iron Man armored adventures with a young Tony Stark is a little weird.