Movie Review: ‘Crash’ of the Titans!

The Goods: ……… that part where Medusa tried to turn Desert Stone Dude in stone? that was mildly funny. The Kraken money shot was somewhat impressive.

The Bads: Where to start??  Liam Neeson costume as Zeus? – Hurrible!

The Ugly: Everything in between. And it featured that lovable mechanical owl from the original….but they THREW HIM AWAY! He would have been the saving grace of this movie!

Forget everything that made the 1981 ‘Clash of the Titans’ so memorable and timeless. None of that is found here. 😐

But what you do get is a high-octane mess of a movie that has ZERO aspects of the awe of Greek Mythology + over-bloated Hollywood budget + ‘Aussie  Darling of the Hour’ Sam Worthington –MINUS– anything and everything that was FUN about the original!

In an effort to erase the glorious memory of the original 1981 version,  director Louis Leterrier and company  go above and beyond the call in a grand spectacle of mediocrity. Yeh…..it’s that bad.

This updated version looked cheesy without trying – and we’re not talking good 80’s movie cheese, like ‘Ice Pirates‘ – this is turgid cheese, like the uber-expensive yet mind-numbing retardation that was ‘Transformers 2‘.

– Sam Worthington’s Perseus reminds us no less than 10x throughout the movie that he wants to finish his quest ‘as a man, not a god’.  Okay dude….WE GET IT. Repeating this mantra continuously throughout the movie doesn’t make it any more ‘profound’ than it did the FIRST nine times!

BOTTOM LINE: If you like watching bad acting, amazingly terrible dialogue, some of the worst costume decisions since Marvel Comics’ ‘Daredevil’ – and yet another movie featuring that one facial expression that Sam Worthington does so well, for 1hr 40min…. then you will love this ‘Clash’.

If you’re like ME – and actually like a well told STORY along with good acting to go with your big budget fantasy lore (LOTR triology, 300) – then, sorry folks…. keep looking. 😦

‘No Sh#t?!’ –  Gemma Arterton looks like a revamped version of Jamie Gertz!! 😛 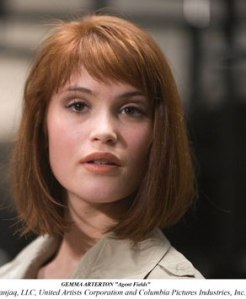 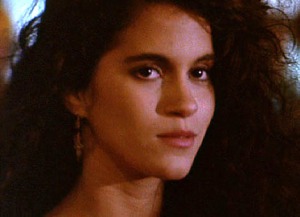