** Disclaimer: this is for the 85% of us who did NOT watch the leaked bootleg of the Wolverine movie. **

In recent news about ‘Things that DO go right in this world’….

Here is what RR had to say about playing the Merc with the Mouth…. 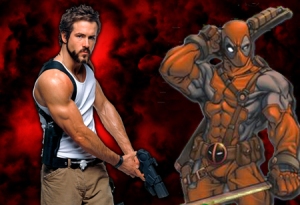 “You’re not going to see ‘Kill Bill‘ -style blood geysering up from severed heads[……] but I think you’re going to see a kind of violence that’s a little more brutal, rugged and ugly. [Deadpool is] a guy you don’t want to mess with. This character is like a surgeon.” Full article at Comic Book Resources….

SWEEET! That is just the type of movie that I luv! Brutal, rugged, and ugly -with a spritzing of eye-candy thrown in for good measure 😀

If ever I HAD a man-crush? –  it’d prob be Ryan Reynolds, who kinda looks like the White version of me :P.

On top of being a good actor – Ryan is married to the hottest woman in Hollywood – ‘do I even have to say her name’?

I wouldn’t be surprised if Ryan Reynolds as DEADPOOL stole every scene he is in  –  Assuming that the suits over in Hollywood write the character correctly!

AND –  if the rumors are true that Ryan Reynolds might be playing THE FLASH? Then I can die a happy man!